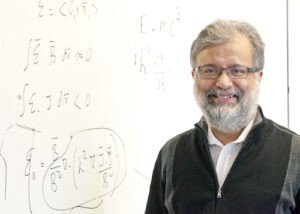 Amitava Bhattacharjee, a professor of astrophysical sciences at Princeton University and a former head of the Theory Department at the Princeton Plasma Physics Laboratory, is principal investigator of the ECP WDMApp subproject.

Researchers supported by the US Department of Energy’s (DOE’s) Exascale Computing Project (ECP) have created an application, called WDMApp, to simulate an entire plasma as part of an effort to produce energy the way stars do—through a thermonuclear fusion reaction.

Combined with exascale computing power, the application will be able to make high-fidelity predictions about the performance of fusion devices and distinguish the differences between competing designs.

WDMApp includes code for the fusion plasma core and edge, which are two distinct but coupled regions that fusion devices must tame to produce energy. The application will provide a detailed picture of the behavior of burning plasma heated by the fusion reactions—known as whole-device modeling—a first in the almost 80-year history of fusion research.

“A fusion plasma is a complex entity,” said Amitava Bhattacharjee, principal investigator of WDMApp. “Our goal is to describe the whole device using a first-principles computational model, which would be predictive for experiments and important aspects of burning plasma.”

Plasmas are very hot gases that are ubiquitous throughout the universe. They are found in stars and here on Earth in the form of lightning and a host of manufactured items, including lightbulbs.

The sun uses plasma to fuse two nuclei to form a new atom, thereby producing its brilliant light and enormous energy. For many years, scientists have attempted to recreate sunlike fusion on Earth and harness the energy for carbon-free electricity.

The largest fusion energy experiment in the world is ITER, which comprises a $22-billion fusion device called a tokamak that is being built in France. The tokamak will have giant rings of plasma confined by magnetic fields that create fusion reactions in what could be thought of as a magnetic bottle. Scheduled to begin operating this decade, ITER is expected to produce 10× the power required to drive it.

Plasmas inside the ITER fusion reactor will have abundant instabilities and turbulence, and WDMApp is designed to predict and model these behaviors. Scientists want details of plasma physics, including their shape, level of stability, and how they confine energy so that future fusion power plants can be designed around these parameters to generate a net energy gain.

Designing and operating tokamaks and other fusion energy facilities will require the combined capabilities of whole-device modeling and exascale computing power. Exascale systems, such as Frontier at DOE’s Oak Ridge National Laboratory (ORNL) and the upcoming Aurora system at Argonne National Laboratory (Argonne), are vital to computing microscale kinetic effects and generating simulations of a whole-device model.

“Exascale computing brings us a step closer to a higher fidelity and deeper physical understanding of such plasmas,” Bhattacharjee said. “Fusion is ravenous for more computational resources that will teach us more about the vast range of scales in the plasmas we describe.”

WDMApp will couple two codes already proven on petascale computers, the predecessors to exascale systems: XGC for the plasma edge and GENE for the plasma core. Both codes must be scaled to build the most advanced whole-device model, which is a challenge being met by the team and others, Bhattacharjee said.

Owing to the added scale and complexity of exascale computer architectures, the WDMApp team had to change the application code to make optimal use of the hardware. Additionally, they devised new mathematical and computational methods to robustly join the plasma core to its edge—an unprecedented accomplishment.

Bhattacharjee explained that the application speedup achieved in preparation for exascale has so far increased code performance by 8×. However, the WDMApp subproject is aiming for an ECP figure of merit, or efficiency factor, of greater than 50×, which requires developing new algorithms. Bhattacharjee said the team has expended extraordinary effort on software engineering, and this effort requires highly talented applied mathematicians, computer scientists, and physicists.

“The WDMApp team has developed new code-coupling algorithms that are implemented in their whole-device modeling, which are then tested for scaling on pre-exascale computers,” he said. “We can’t wait to test these codes on Frontier and Aurora. We’ve succeeded in doing that for electrostatic coupling, and we’re now working on electromagnetic coupling, which is a harder problem.”

A theoretical physicist, Bhattacharjee is a professor of astrophysical sciences at Princeton University and is a former head of the Theory Department at the Princeton Plasma Physics Laboratory, a DOE national laboratory focused on developing fusion energy. Also central to the WDMApp development effort are Douglas Kothe and Thomas Evans at ORNL, Lori Diachin and Erik Draeger at Lawrence Livermore National Laboratory, and Andrew Siegel at Argonne.

This research is part of the DOE-led Exascale Computing Initiative, a partnership between DOE’s Office of Science and the National Nuclear Security Administration. The ECP, launched in 2016, brings together research, development, and deployment activities as part of a capable exascale computing ecosystem to ensure an enduring exascale computing capability for the nation.