Particle accelerators—big, expensive machines that produce beams of charged particles—have impacted many areas of fundamental research for decades, supporting Nobel Prize–winning work and advancing the pace of scientific discovery. But soon, smaller and less-expensive particle accelerators could be designed. These improvements would enable the production of tens of thousands of the devices for use in solving currently out-of-reach problems in areas ranging from high-energy physics to medicine and industry.

The prime game-changing technology for the development of these new accelerators, scientists say, is based on the use of plasma, or ionized gas particles. And they explain that designing plasma accelerators depends critically on high-performance, high-fidelity computational modeling to capture the full complexity of acceleration processes that manifest over a wide range of space and timescales. 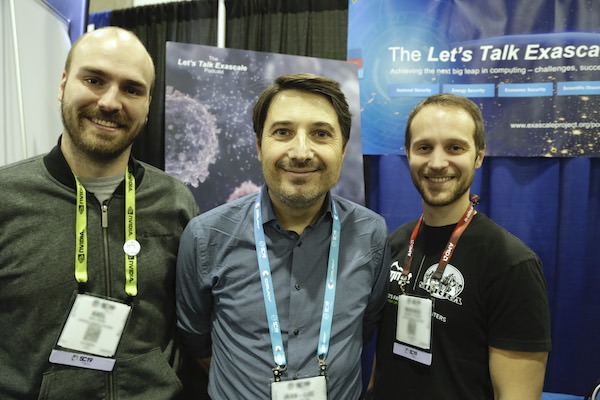 The new breeds of virtual experiments that the WarpX team is developing are not possible with current technologies and will bring huge savings in research costs, according to the project’s summary information available on ECP’s website. The summary also states that more affordable research will lead to the design of a plasma-based collider, and even bigger savings by enabling the characterization of the accelerator before it is built.

To share insights about WarpX, the project’s principal investigator, Jean-Luc Vay of Lawrence Berkeley National Laboratory (Berkeley Lab), along with team members Axel Huebl and Maxence Thévenet, also of Berkeley Lab, are guests on ECP’s podcast, Let’s Talk Exascale. The interview was recorded this past November in Denver at SC19: The International Conference for High Performance Computing, Networking, Storage, and Analysis.

Vay manages WarpX and assists in the design of the algorithms, addressing various technical issues. Huebl, who joined the team after completing his PhD in Germany last summer, brings to bear his experience as a very early adopter of GPU programming and his focus on open science and open data movement. Thévenet has been involved in several parts of the project—from code development to testing, to using the code for production simulations—since he came on board in 2016 upon earning his PhD in France.

The WarpX team collaborates across ECP, but the majority of the interactions are with the co-design center that is developing AMR for exascale (AMReX). AMR allows scientists to zoom to parts of the simulation where small details are important, without having to finely resolve the entire simulation. Thus, AMR reduces the computational cost and the memory footprint.

Thévenet said WarpX is using a unique form of PIC code that gathers three main ingredients: advanced algorithms for the high accuracy necessary to solve the equations of physics, a level of performance to run on the current pre-exascale machines and the forthcoming exascale systems, and portability based on code that is simple enough to be understood and modified but still capable of performing properly on different machines and different architectures.

One of the big challenges for WarpX is the coupling of mesh refinement with electromagnetism. “We have been able, already, to solve several of the most difficult technical challenges of first-of-a-kind simulations that couple this technique together, and we’re working now on porting all of this to GPUs to solve the last remaining technical issue. We think we’ve got a good handle on this,” Vay said.

Because WarpX is an open-source code, another indicator of the project’s degree of accomplishment is the level of interest shown by the high-performance computing community, Thévenet said. “Right now, we’ve started having users that come from different labs around the world who are interested in our project, and I think this is one of the successes,” he added.

Huebl cited algorithm improvement as yet another favorable outcome of WarpX. He said the team changed many core algorithms from Fortran to C++ lambda, which is currently a very popular way to express algorithms. “We got rid of most of the parts we hadn’t transformed within a week,” he added. “This was really amazing to see. Since then, we’ve reduced this dramatically and have a totally performance-portable code that comes from one source code.”

“If the project is successful—and we think it will be—the direct impact will be to have the ability to design this new type of accelerators and deliver them to the market,” Vay said.

The Department of Energy and the US DOE labs are working together to combat COVID-19. Learn more.