Algorithms in commonly used toolkits such as VTK and ParaView focus on single-timestep data, and only a few filters are provided to track features over time. Few existing feature-tracking algorithms are designed for scalability and parallel processing, but these characteristics will be paramount in the exascale computing environment, in which data volumes will outstrip input/output capabilities and data storage for post hoc analysis and visualization will be infeasible. FTK’s simplicial meshes provide specificity, stability, and scalability for feature tracking by eliminating ambiguities, easing the handling of degeneracies, and accelerating feature-tracking algorithms with both GPU and distributed parallelism.

The FTK toolkit benefits a range of sciences, including fusion. The fusion community has used FTK to better understand the evolution of blob features—regions of high turbulence that run along the edge wall of a tokamak down toward the diverter, causing damage—in plasma simulations. FTK redefines these ill-defined features as 3D objects that can be generalized to 4D toroidal- and spacetime-tracking. FTK’s key innovation is the simplicial spacetime meshing scheme that enables feature tracking in 4D spacetime directly. Future work includes developing spacetime mesh generalizations for finite volume meshes, adaptive mesh refinement, and point clouds to impact broader science applications. The researchers work in the Co-design Center for Data Analysis and Reduction, a program of the Exascale Computing Project. 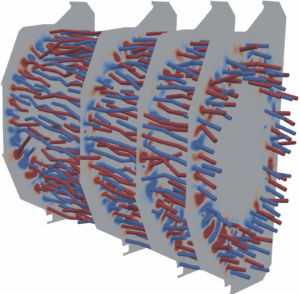