As part of the US Department of Energy’s Exascale Computing Project (ECP), the Earthquake Simulation (EQSIM) application development team is creating a computational tool set and workflow for earthquake hazard and risk assessment that moves beyond the traditional empirically based techniques which are dependent on historical earthquake data. With software assistance from the ECP’s software technology group, the EQSIM team is working to give scientists and engineers the ability to simulate full end-to-end earthquake processes. This means understanding what takes place from the initiation of fault rupture (i.e., start of an earthquake) to modeling surface ground motions (i.e., earthquake hazard) to providing engineers with precise information that they can use to evaluate infrastructure response and evaluate the risk to people and property. EQSIM’s ultimate goal is to remove the computational limitations that currently prevent understanding earthquake phenomenology and practical earthquake hazard and risk assessments.[i]

Traditional earthquake hazard and risk assessments for critical infrastructure have relied on empirically based approaches that use historical earthquake ground motions from many different locations to estimate future earthquake ground shake at a specific site of interest, such as a bridge or building. Because ground motions for a particular site are strongly influenced by the physics of the specific earthquake processes—including the fault rupture mechanics and seismic wave propagation through the ground (a complex heterogeneous medium)—much of the complexity of the ground shake is lost. Unfortunately, the homogenization of many disparate records in traditional empirically based estimates cannot fully capture the complex site specificity of ground motion, including frequency, amplitude, and directionality.

Historically, limitations in available computing power meant that scientists and engineers running regional-scale earthquake simulations could only model ground vibrations at about 1 or 2 Hz, or one or two cycles per second. Although much progress had been made, it was insufficient because critical infrastructure, such as buildings, bridges, and energy system infrastructure can be seriously impacted by higher frequency vibrations up to 5 or 10 Hz. This mismatch between existing computational capability and what is needed to perform high fidelity simulation has limited scientists’ ability to simulate ground motions at frequencies relevant to structures and thus assess the risks associated with building collapse and the economic consequences of key infrastructure damage, such as bridges failing.[ii]

The focused effort of the EQSIM team has addressed this computational barrier and is now able to model ground movement up to 10 Hz. Along with other work, a porting effort to new GPU-based supercomputers has been fundamental in delivering this additional computational capability. The initial work was performed by using the Summit supercomputer at Oak Ridge National Laboratory with the assistance of ECP’s software technology team who support the RAJA performance portability libraries and other work related to preparation for the efficient execution of scientific software on emerging US Department of Energy exaflop platforms in the 2022 timeframe.[iii]

The increased capability to assess damage for a broad class of infrastructure is shown in Figure 1. In addition to running much higher fidelity models to capture higher frequency resolution, it is important to be able to run the associated models fast so the full space of earthquake parameters (e.g. the different ways a given fault can rupture) can be appropriately accounted for.

Figure 1. The EQSIM challenge of regional simulation at frequencies that impact a broad range of infrastructure. (Source: https://ecpannualmeeting.com/assets/overview/sessions/ECP2020McCallenFinal-compressed.pdf.)

The large 16× growth in computational capability provides a ground level view of the tremendous value of exascale supercomputers. Current leadership-class machines provide an existing platform that acts as a jumping off point to demonstrate what is possible on these future machines. These initial efforts give scientists important insight into what is needed to accommodate the runtime growth of challenging but tractable physics-based simulations when the exascale systems become available. It also gives them insight into any limitations in the current models (e.g., limitations in models, mesh size, mesh resolution) that must be addressed to deliver optimal performance and actionable results.

End Result will Save Lives and Avoid Severe Economic Consequences

These efforts, as exemplified by EQSIM, will result in lives saved and the ability to assess and plan to avoid catastrophic infrastructure failure. In this case, existing infrastructure can be reinforced and policies amended for new building construction in earthquake zones.

The value proposition for EQSIM is great, and historic failures abound. Examples include the collapse of the double-deck Cypress Street Viaduct off Interstate 880 in West Oakland during the 1989 Loma Prieta earthquake in California. The failure of a 1.25 mi (2.0 km) section of the viaduct killed 42, injured many more, and caused roughly $11.6–12.4 billion in damage in inflation-adjusted dollars.[v] Similarly, the 1994 Northridge earthquake killed 60 people, injured more than 9,000, and caused approximately $22–86 billion in 2014 inflation-adjusted dollars, making it one of the costliest natural disasters in US history. The Northridge earthquake also damaged portions of several major roads and freeways, including Interstate 10 over La Cienega Boulevard, and the interchanges of Interstate 5 with California State Route 14, 118, and Interstate 210 were also closed due to structural failure or collapse.[vi] All these previous events impacted transportation and the economies of the region for extended periods after the earthquake. Figure 2 shows EQSIM’s exascale goal to be able to execute high-fidelity simulations quickly within a computational ecosystem that delivers relevant results. 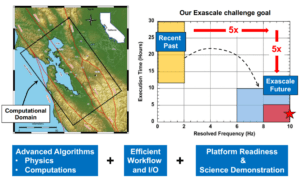 Figure 2. The EQSIM exascale goal to be able to execute high-fidelity simulations quickly within a computational ecosystem that delivers relevant results. (Source: https://ecpannualmeeting.com/assets/overview/sessions/ECP2020McCallenFinal-compressed.pdf.)

The EQSIM team has focused on three areas to provide an end-to-end workflow that encompasses the relevant physics and performance requirements needed to give scientists the information they need to assess risk and hopefully avoid catastrophe.

David McCallen—Professor in the Department of Civil and Environmental Engineering at the University of Nevada, Reno and Senior Scientist at Lawrence Berkeley National Laboratory—observed in his interview with ECP Communications Specialist Scott Gibson that the team has been working in three areas. (Scott’s interview is available in text and podcast form.)

This linkage between ground motion and infrastructure is very important because engineers can see how those complex 3D incident waves from ground movement impinge and interact with infrastructure. Previously, engineers had to make simplifying assumptions about how those incident waves looked, which necessarily limited the accuracy of their risk assessments using traditional empirically based techniques.

The richness of the information provided by the complete EQSIM workflow about the distribution of ground motions and the distribution of infrastructure risk is shown in Figure 3. The workflow includes several established and respected codes, including SW4, a fourth-order, 3D seismic wave propagation model; NEVADA, a nonlinear, finite displacement program for building earthquake response; and OPENSEES, a nonlinear finite-element program for coupled soil-structure interaction. 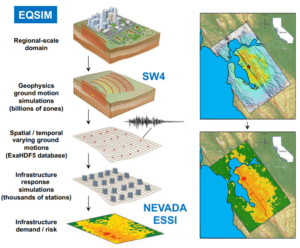 To evaluate regional-scale simulations and measure the computational progress of the application development and exascale performance goals of this project, the team created a representative large regional-scale detailed model of the San Francisco Bay Area (SFBA), as shown in Figure 3.

This model includes all the necessary geophysics modeling features (e.g., 3D geology, earth surface topography, material attenuation, nonreflecting boundaries, fault rupture models). For a 10 Hz simulation, the computational domain includes up to 300 billion grid points in the finite difference domain for models that contain fine-scale representations of soft near-surface sedimentary soils. The SFBA model provides a comprehensive basis for testing and evaluating advanced physics algorithms and computational implementations. The Hayward fault, running along the east side of the San Francisco Bay and a central focus of the EQSIM performance testing (shown by the line paralleling the San Francisco Bay in Figure 3), has consistently generated a major earthquake every 150 years on average and the last event occurred in 1868, making the simulation of this region and this fault of particular societal importance.[vii] [viii] [ix]

McCallen notes that moving to the Summit supercomputer and the associated software development effort were “tremendously enabling” because they increased the EQSIM figure of merit (FOM) from a factor of 66 to 189.[x] The FOM is a quantitative metric of the scientific work rate of an application. As the code is optimized to run faster, the FOM increases. As shown in Figure 4, the 1 year jump between FY19 and FY20 is huge. 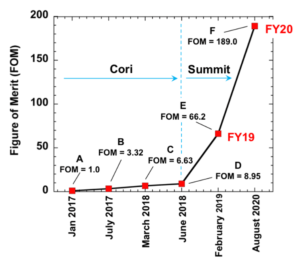 The EQSIM project demonstrates the value of extreme scale (e.g., exascale) supercomputers. When coupled with the equally sophisticated software, such computational power can demonstrably deliver the performance scientists and engineers need to solve socially relevant problems that can save lives and prevent future economic distress.

[ix] The Most Dangerous Fault in America, Earth Magazine. https://www.earthmagazine.org/article/most-dangerous-fault-america