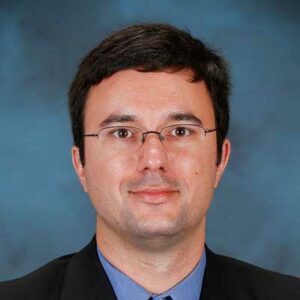 My name is Steven Hamilton and I work in the Reactor and Nuclear Systems Division at Oak Ridge National Laboratory. Within the Exascale Computing Project, I am leading a subproject called ExaSMR, which is an effort to advance the state of the art for computational modeling of nuclear reactors, with a particular focus on a class of reactor designs known as small modular reactors, or SMRs.

Simulation plays a vital role in reactor design. If someone has an idea for a new reactor concept, it could take decades and billions of dollars to build a prototype of that reactor to test it out. Instead, we can construct a computational model that can predict how a particular design would behave if it were built. But in order for this process to work, you have to have tremendous confidence that your computer simulation is actually behaving the same way the real system would. That’s where we want ExaSMR to enter into the picture. We’re working on using the most accurate available computational methods to make predictions about the behavior of SMRs and other types of advanced nuclear reactor designs.

Using existing computers, and even some of the very large supercomputers that we have access to today, simulations using these methods are generally not feasible—you would have to run your program for so long that you wouldn’t get results from your simulation in time for it to be useful. That’s why our team is so excited about the planned exascale machines, Frontier and Aurora. The computing power behind these machines will let us run problems of a magnitude that is well beyond what is possible today. Our team is already running fluid flow simulations on Oak Ridge’s Summit supercomputer that model the coolant flow through an entire SMR core in more detail than any previous simulations.

With the arrival of Frontier and Aurora, we will be able to further improve these simulations by modeling the coupling between the flow of the coolant and other physics mechanisms such as neutron transport. Additionally, we will be able to simulate the evolution of a reactor over time, while the highest resolution simulations today are limited to isolated points in time.

The opportunities that have been created by the exascale computing project are absolutely incredible for us. Not only are they providing funding to support the development of our simulation tools, but we have access to this community of experts across a wide range of disciplines, from the domain scientists to mathematicians and computer scientists, all working towards a common goal. And on top of that, we get access to the world’s largest computing resources to advance our scientific mission. The project has been a lot of fun to work on so far and I’m really looking forward to seeing what we can accomplish over the next few years.