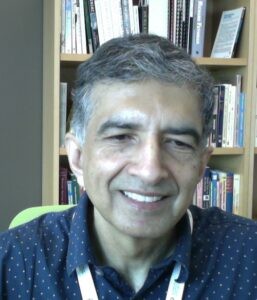 I’m Salman Habib, physicist at Argonne National Laboratory, where I am director of the Computational Science Division and am also a member of the High Energy Physics Division. Within the Exascale Computing Project, I lead the ExaSky Applications Development effort.

The aim of the ExaSky project is to develop large-scale, high-resolution cosmological simulations where we can predict, with a very good sense of realism, what current and future sky surveys actually observe.

Driven by very impressive observations of the sky carried out over the last few decades across multiple wavebands—from the x-ray to the optical, to the infrared, to radio—we have succeeded in building a model of the universe that is remarkably successful in describing what has been observed. The catch is that the key ingredients of the model, dark energy (the supposed cause of the acceleration of the expansion rate of the universe) and dark matter (a new type of matter that dominates the universe and, apparently, only interacts gravitationally) are both very poorly understood.

With new datasets arriving and set to arrive from a number of new facilities such as the Vera Rubin Observatory, and a number of international space missions, the aim of the ExaSky project is to use Frontier, and later Aurora, to run a set of extreme-scale cosmological simulations—these will be large enough to simulate entire surveys, capturing as much observational detail as possible given the current computational limits and present knowledge of cosmological physics. These massive simulations have multiple aims—to understand and improve cosmological measurements, to be realistic testing grounds for analysis methods, and to predict possible deviations from the currently accepted paradigm.

The simulations will generate large amounts of data. In fact, we can easily generate more data than will be taken by the surveys! Consequently, new methods for data analysis that meld high-performance computing, advanced statistical methods, and artificial intelligence and machine learning techniques are also of great interest and are being actively worked on.

The ExaSky team is looking forward to pushing the frontiers of knowledge and be a part of foundational scientific discovery!