The researchers used the Summit and Cori supercomputers, located at Oak Ridge and Lawrence Berkeley National Laboratories, respectively, to test their method with several representative I/O kernels and real application workloads, including Nyx from the ExaSky project and Castro from the ExaStar project to evaluate asynchronous I/O operations in ECP software frameworks AMReX and Flash-X. The team has consulted with NASA’s Ames Research Center on adopting asynchronous I/O methods, and there is significant interest from the HDF5 user community. The researchers have been working with both ECP and non-ECP applications that spend a significant amount of time executing I/O operations to speed up their execution time. They are developing the use of locality-aware I/O operations, testing asynchronous I/O with HDF5-based libraries such as h5py, and exploring caching and prefetching methods for broader applicability. 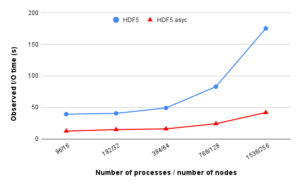