Small modular reactors (SMRs) are advanced nuclear reactors that can be incrementally added to a power grid to provide carbon-free energy generation to match increasing energy demand.[1],[2] Their small size and modular design make them a more affordable option because they can be factory assembled and transported to an installation site as prefabricated units.

Compared to existing nuclear reactors, proposed SMR designs are generally simpler and require no human intervention, external power, or the application of external force to shut down. SMRs are designed to rely on passive systems that utilize physical phenomena, such as natural circulation, convection, gravity, and self-pressurization to eliminate or significantly lower the potential for unsafe releases of radioactivity in case of an accident.[3] Computer models are used to ensure that the SMR passive systems can safely operate the reactor regardless of the reactor’s operational mode—be it at idle, during startup, or running at full power.

Current advanced reactor design approaches leverage decades of experimental and operational experience with the US nuclear fleet and are informed by calibrated numerical models of reactor phenomena. The exascale SMR (ExaSMR) project generates datasets of virtual reactor design simulations based on high-fidelity, coupled physics models for reactor phenomena that are truly predictive and reflect as much ground truth as experimental and operational reactor data.[4]

Hamilton notes that high-resolution models are essential because they are used to reflect the presence of spacer grids and the complex mixing promoted by mixing vanes (or the equivalent) in the reactor. The complex fluid flows around these regions in the reactor (Figure 1) require high spatial resolution so engineers can understand the neutron distribution and the reactor’s thermal heat transfer efficiency. Of particular interest is the behavior of the reactor during low-power conditions as well as the initiation of coolant flow circulation through the SMR reactor core and its primary heat exchanger during startup. 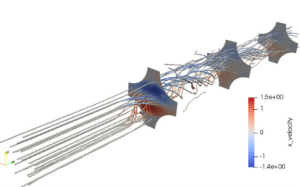 To make the simulations run in reasonable times even when using an exascale supercomputer, the results of the high accuracy model are adapted so they can be utilized in a reduced order methodology. This methodology is based on momentum sources that can mimic the mixing caused by the vanes in the reactor. [7] Hamilton notes, “Essentially, we use the full core simulation on a small model that is replicated over the reactor by mapping to a coarser mesh. This coarser mesh eliminates the time-consuming complexity of the mixing vane calculations while still providing an accurate-enough representation for the overall model.” The data from the resulting virtual reactor simulations are used to fill in critical gaps in experimental and operational reactor data.  These results give engineers the ability to accelerate the currently cumbersome advanced reactor concept-to-design-to-build cycle that has constrained the nuclear energy industry for decades. ExaSMR can also provide an avenue for validating existing industry design and regulatory tools.[8] 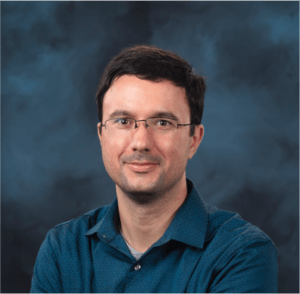 Figure 2. Steven Hamilton, PI of the ExaSMR project and Senior researcher at ORNL.

“The importance,” Hamilton states, “is that many different designs are being studied for next-generation reactors. Investing in computer design capability means we can better evaluate and refine the designs to come up with the most efficacious solutions. Exascale supercomputers give us a tool to model SMRs with higher resolution than possible on smaller supercomputers. These resolution improvements make our simulations more predictive of the phenomena we are modeling. We are already seeing significant improvements now on pre-exascale systems and expect a similar jump in performance once we are running on the actual exascale hardware.” He concludes by noting, “Many scientists believe that nuclear is the only carbon-free energy source that is suitable for bulk deployment to meet primary energy needs with a climate-friendly technology.”

The importance is that many different designs are being studied for next-generation reactors. Investing in computer design capability means we can better evaluate and refine the designs to come up with the most efficacious solutions. Exascale supercomputers give us a tool to model SMRs with higher resolution than possible on smaller supercomputers. These resolution improvements make our simulations more predictive of the phenomena we are modeling. We are already seeing significant improvements now on pre-exascale systems and expect a similar jump in performance once we are running on the actual exascale hardware. –Steven Hamilton

To achieve their goal of generating high-fidelity, coupled-physics models for truly predictive reactor models, the team must overcome limitations in computing power that have constrained past efforts to modeling only specific regions of a reactor core.[9] To this end, the ExaSMR team has adapted their algorithms and code to run on GPUs to realize an orders-of-magnitude increase in performance when running a challenge problem on the pre-exascale Summit supercomputer.

Hamilton explains, “We were able to perform the simulations between 170× and 200× faster on the Summit supercomputer compared to the previous Titan ORNL supercomputer. Much of this is owed to ECP’s investment in the ExaSMR project and the Center for Efficient Exascale Discretizations (CEED) along with larger, higher performance GPU hardware. The CEED project has been instrumental for improving the algorithms we used in this simulation.”

In demonstrating this new high watermark in performance, the team also performed (to their knowledge) the first ever full-core, pin-resolved CFD simulation that modeled coolant flow around the fuel pins in a light water reactor core. These fluid flows play a critical role in determining the reactor’s safety and performance. Hamilton notes, “This full core spacer grids and the mixing vanes (SGMV) simulation provides a high degree of spatial resolution that allows simultaneous capture of local and global effects. Capturing the effect of mixing vanes on flow and heat transfer is vital to predictive simulations.”

This full core spacer grids and the mixing vanes (SGMV) simulation provides a high degree of spatial resolution that allows simultaneous capture of local and global effects. Capturing the effect of mixing vanes on flow and heat transfer is vital to predictive simulations. –Steven Hamilton

The complexity of these flows can be seen in streamlines in Figure 1. Note the transition from parallel to rotating flows caused by simulation of the CFD momentum sources.

A Two-Step Approach to Large-Scale Simulations

A two-step approach was taken to implement a GPU-oriented CFD code using Reynolds-Averaged Navier-Stokes (RANS) equations to model the behavior in this SGMV challenge problem.

Jun Fang, an author of the study in which these results were published, reflects on the importance of these pre-exascale results by observing, “As we advance toward exascale computing, we will see more opportunities to reveal large-scale dynamics of these complex structures in regimes that were previously inaccessible, thereby giving us real information that can reshape how we approach the challenges in reactor designs.”[11]

This basis for this optimism is reflected in the strong scaling behavior of NekRES, a GPU-enabled branch of the Nek5000 CFD code contributed by the ExaSMR team.[12] NekRS utilizes optimized finite-element flow solver kernels from the libParanumal library developed by CEED. The ExaSMR code is portable owing in part to the team’s use of the ECP-supported exascale-capable OCCA performance portability library. The OCCA library provides programmers with the ability to write portable kernels that can run on a variety of hardware platforms or be translated to backend-specific code such as OpenCL and CUDA. 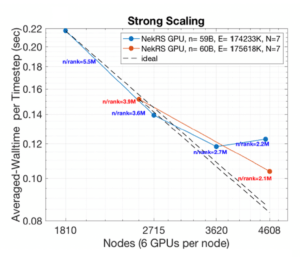 Even with the considerable computational capability of exascale hardware, the team was forced to develop a reduced-order methodology that mimics the mixing of the vanes to make the full core simulation tractable. “This methodology,” Hamilton notes, “allows the impact of mixing vanes on flow to be captured without requiring an explicit model of vanes. The objective is to model the fluid flow without the need of an expensive body-fitted mesh.” Instead, as noted in the paper, “The effects of spacer grid, mixing vanes, springs, dimples, and guidance/maintaining vanes are taken into account in the form of momentum sources and pressure drop.”[13]

This methodology allows the impact of mixing vanes on flow to be captured without requiring an explicit model of vanes. The objective is to model the fluid flow without the need of an expensive body-fitted mesh. –Steven Hamilton

Validation of the Challenge Results

To ensure adequate accuracy of the reduced order methodology, the momentum sources are carefully calibrated by the team with detailed LES of spacer grids performed with Nek5000.[14] The Nek5000 reference was used because it is a trusted reference in the literature.

“The combination of RANS (full core) and LES,” the team wrote in their paper, “forms a flexible strategy that balances both efficiency and the accuracy.” Furthermore, “Continuous validation and verification studies have been conducted over years for Nek5000 for various geometries of interest to nuclear engineers, including the rod bundles with spacer grid and mixing vanes.”[15]

Expanding on the text in the paper, Hamilton points out that “the momentum source method (MSM) was implemented in NekRS using the same approach developed in Nek5000, thereby leveraging as much as possible the same routines.”

Validation of the simulation results includes the demonstration of the momentum sources shown in Figure 1 as well as validation of the pressure drop. Both are discussed in detail in the team’s peer-reviewed paper, which includes a numerical quantification of results by various figures of merit. Based on the success reflected in the validation metrics, the team concludes that they “clearly demonstrated that the RANS momentum sources developed can successfully reproduce the time-averaged macroscale flow physics revealed by the high-fidelity LES reference.”[16]

The Groundwork has been Laid to Expand the Computational Domain

Improved software, GPU acceleration, and reduced-order mesh numerical methodologies have laid the groundwork for further development of the integrated ExaSMR toolkit. In combination with operational exascale hardware, the ExaSMR team can expand their capabilities to simulate and study the system behavior concerning the neutronics and thermal–hydraulics of these small reactors.

The implications are significant because the passive design and ease of installation means that SMRs offer a solution where the United States and the world can meet essential carbon-neutral climate goals while also addressing the need to augment existing electricity generation capacity.

This research was supported by the Exascale Computing Project (17-SC-20-SC), a joint project of the US Department of Energy’s Office of Science and National Nuclear Security Administration, responsible for delivering a capable exascale ecosystem, including software, applications, and hardware technology, to support the nation’s exascale computing imperative.

Rob Farber is a global technology consultant and author with an extensive background in high-performance computing and in developing machine learning technology that he applies at national laboratories and commercial organizations.