Ken Moreland, a senior research scientist in the Oak Ridge National Laboratory (ORNL) Visualization Group, notes that, “VTK-m introduces a new way of thinking about core visualization algorithms that can make better use of emerging computer architectures, such as GPUs. Most scientific visualization workloads for the exascale computing project (ECP) will use the VTK-m toolkit when running on the forthcoming exascale supercomputers.” This is because current US exascale systems are designed to work in concert with GPU accelerators to deliver exascale levels of performance.

“VTK-m introduces a new way of thinking about core visualization algorithms that can make better use of emerging computer architectures, such as GPUs. Most scientific visualization workloads for the ECP will use the VTK-m toolkit when running on the forthcoming exascale supercomputers.” —

Created in 1993, the CPU-based VTK software has been wildly successful, and because of its open-source license, it has been widely adopted by the scientific community. The well-known ParaView and VisIt visualization packages are based on the VTK software.

As shown in Figure 1, small core count CPUs were predominant during the first two decades of VTK development. The red line in Figure 1 illustrates the small number of cores per socket used by the supercomputers in the TOP500 list from the early 1990s until 2014, which meant that there was no real need to optimize VTK for multicore, multithreaded performance. Machine architectures have since changed. Now, most supercomputers in the TOP500 list are GPU accelerated. [ii] All the currently planned US exascale systems will be GPU accelerated. 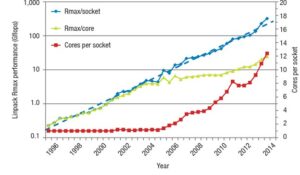 Modern systems based on many-core CPUs and massively parallel GPUs now support fine degrees of parallelism, which unfortunately adversely affects the performance of VTK on these devices. In addition to challenges with dynamic memory allocation, a paper by Moreland et al. (2016) justifies the need for VTK-m by observing that, “Finely threaded visualization algorithms need to be cognizant of potential load imbalance and schedule work  accordingly.” The paper highlights that, “VTK-m implements visualizations using this new modality. This requires reimagining how we want to implement things. Clearly, we do not want to rewrite VTK. Instead, VTK-m has been designed to integrate with existing tools.”

“VTK-m implements visualizations using this new modality. This requires reimagining how we want to implement things. Clearly, we do not want to rewrite VTK. Instead, VTK-m has been designed to integrate with existing tools. Both ParaView and VisIt are adopting VTK-m functionality to support GPU-based processing.” — Ken Moreland

Key to VTK-m adoption is the portability it provides when moving to systems that provide this new fine-grained parallel—and with GPU acceleration—heterogeneous computing functionality. The idea is that developers can write their applications once by using VTK and have VTK-m support visualization on the latest highly parallel architectures. The VTK-m team even provides an interface to use the original VTK application programming interface (API), so VTK-m now provides a fundamental functionality for scientific visualization, as shown in Figure 1. Strong support by vendors means that users can run on GPU systems, regardless of which hardware vendor designed the hardware. Partly due to this portability aspect and strong vendor support, Moreland notes that, “Both ParaView and VisIt are adopting VTK-m functionality to support GPU-based processing.” 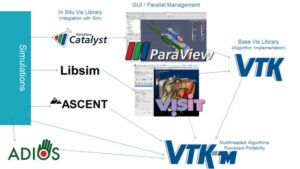 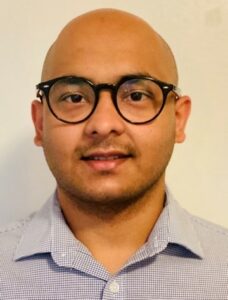 Figure 4 shows the ratio of the speedup or slowdown of the portable VTK-m algorithm performance relative to a nonportable implementation when run on the same hardware. An average 1.14 speedup was observed, which demonstrates that the portable performance of VTK-m is comparable to existing implementations. [iii] 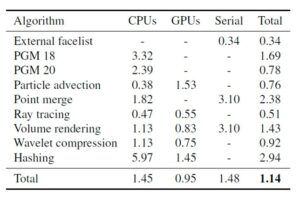 A detailed discussion of the methodology and analysis of the experimental data is provided in Moreland et al. (2021), which is too lengthy to include here. Briefly, the results in Figure 4 are reported in terms of the geometric mean over the experiments performed where each column in the figure shows the following.

Compatibility with VTK means that VTK-m also provides a natural basis for the use of GPUs in new visualization techniques, such as in situ and in transit visualization. These techniques significantly reduce or eliminate data movement, which in turn can greatly speed visualization tasks and reduce power consumption in the datacenter.

Moreland notes that many people in the ECP are working to integrate VTK-m as a component to support visualization on GPU-accelerated systems. Projects include the Alpine/ZFP ECP project for in situ infrastructure, data analysis, visualization, and compression for exascale science; the ParaView Catalyst (Catalyst) in situ use case library, which contains an adaptable API to orchestrate the work between simulation and analysis and/or visualization tasks; and libsim, the in situ library for VisIt.

The following are some ECP examples with other partners:

Modern supercomputers leverage manycore processors and massively parallel GPU parallelism to achieve power efficiency, scalability, and soon-to-be-demonstrated exascale levels of performance. To keep pace with these developments, the VTK-m library has updated the memory management, load-balancing capability, and performance of numerous algorithms to support scientific visualization on these new architectures. Furthermore, VTK-m was designed to integrate with existing tools and has strong multivendor support, which makes it a core library that will be used by all ECP visualization workloads when running on the forthcoming US exascale supercomputers. Even better, VTK-m is freely available for all HPC users so they can leverage the performance of GPU accelerators for their scientific visualization workloads.